As we’ve seen in the « What’s in a Name? » blog series, Japan is famous for producing green tea in great variety. There’s sencha, tencha, matcha, gyokuro, kukicha, bancha, genmaicha, and houjicha. These have been central to Japanese production for hundreds of years. However, if we look beyond green tea, there is even more delicious tea to discover! In that vein, let’s talk about Japanese black tea. 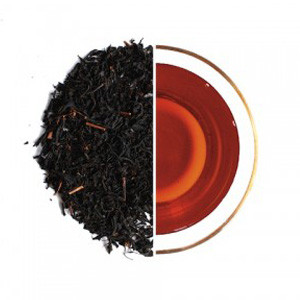 Although in English we refer to this kind of tea as « black, » in Japanese, it’s actually called red (kou, 紅) tea. Japanese water is soft, low in lime. Water in Europe can be quite hard. The tea actually reacts the the pH of the water it’s brewed in, so back in the day, the same tea brewed in Japan would look reddish, and brewed in Europe, it would be much darker.

Tea transported by sea would also be affected by the salty sea air, and would brew darker after the journey.

Black tea production is quite different from green tea. Japanese green tea is steamed soon after picking, which kills enzymes and stops oxidation (browning). That’s why Japanese green teas like sencha are such a bright green. For black tea, however, oxidization is necessary, so they are left to wither for 16-17 hours.

Next, the leaves are rolled for several hours at room temperature by a rolling machine, which presses the leaves against the sides of a barrel to lightly bruise them, and then they are dried for preservation. 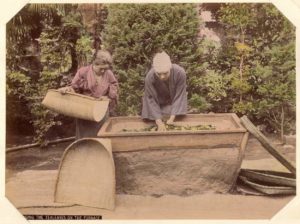 Tea processing in the Meiji period

Black tea was first produced in Japan about 150 years ago, during the Meiji period (1868-1912), when Japan was opened up to international trade. This economic shift stimulated a lot of experimentation in tea processing, especially to make it stand up to longer shipping times. Black tea stays fresh longer than Japanese-style steamed green tea, which is very sensitive to air and sunlight.

Japan began to export large quantities of tea to western countries, and in 1874, Japanese tea exported to the U.S. surpassed Chinese tea–quite a feat for a country so much smaller! However, the export boom did not last. The 20th century brought the World Wars and more drastic shifts in economy, and today, only about 2% of Japanese tea is exported.

The Japanese tend to prefer umami-rich senchas, and so black tea production shrank. Today there are only about 300 tea farmers producing black tea in Japan, and a very small amount of black tea is made.

Because Japanese tea cultivars are usually different from the ones grown in India, Sri Lanka, and other major black tea producing countries, Japanese black tea can taste quite different. While wakoucha maintains the earthy, sweet flair of black tea, its flavour is especially delicate, with just a hint of astringency. The color of the brew is a warm, red tone. This refreshing tea is perfect for a morning pick-me-up, or in combination with some afternoon deserts.

Why not try some?