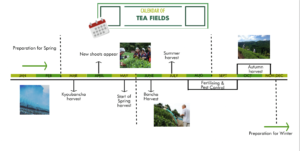 Tea farming through the year

Tea fields are spectacular sights regardless of season. During spring, vivid green, well-manicured rows of tea plants look beautiful with the sakura as a background. Warm summer weather signals for the peak of harvest. The autumn foliage provides a contrast between the hues of red and green, then as the winter chill sets in, one might be lucky to have a glimpse of the field covered in powdery snow.

The beauty of these fields can be attributed to the hard work of the farmers who oversee the maintenance of the plants. Here is a brief summary of agricultural processes every season:

The onset of spring means that new shoots will appear soon.

The tea leaves which survived winter are harvested to produce kyobancha.  Pest control is started in to some tea fields.

The new shoots appear in the tea plants. Depending on the type of tea, fields may also get shaded at the end of the month. Shading is an essential part for the production of gyokuro, kabuse sencha & matcha.

From April, the leaves need 40 days to grow. The first harvest commences during this month where only a thin layer (5cm-8cm) of the young leaves is harvested. Both fertilizing and pest control is carried in the fields.

The top of the new shoots was harvested for spring.  The lwer layer of new leaves, plus some of the old winter leaves left will be harvested during this season

Yanagi Bancha is the middle layer of the tea plant. Compared to new shoots in spring harvest, the leaves for this harvest are slightly bigger and coarser. Harvesting this layer of leaves also prepares the tree for the next flush 40 days later.

A new layer of shoots grows after the previous harvest. The leaves contain less nutrients as majority of the tea plants’ components were used during spring.

Both fertilizing and pest control is again carried in the fields. Weeds are also taken out.  Farmers cut the sides of the bushes so the plants are more exposed to the sunlight and to also make the fertiliser more effective.

Farmers are gradually starting the preparation of fields for winter. The autumn harvest begins in October.

Another round of fertilizing and pest control is carried in the fields.

Autumn harvest begins! As there have been three flushes, tea plants are noticeably taller.

The harvest continues until the beginning of this month. The lower part of the plant is harvested for cooking grade matcha. Another round of fertilisers is applied to the fields.

The last harvest concludes during November. Winter is a quiet season for production.

The majority of work revolves around the preparation of the tea fields for spring. The uniformity of the hedges is not only essential for aesthetics but also to the growth of the new shoots.  The trimming of tea plants is done during this month to achieve this. In this process, a trimming machine is used to cut a thin layer of leaves in the surface of tea plants to give space for the new shoots.

Organic fertiliser is added to the soil. The tea plants are dormant until February. The farmer cut the branches of surrounding trees to increase sun exposure and to prevent frost.

The maintenance of tea fields requires patience and hard work however the smile brought by a cup of freshly brewed tea is worth every ounce of effort in producing the tea. The satisfaction and happiness tea brings, are rewards for the farmers.