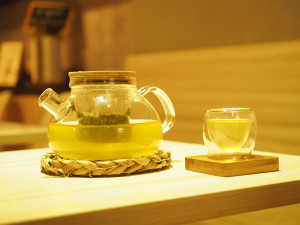 The moment the arrangements were set up, the plan began to totter as a huge earthquake hit Taiwan. With a magnitude of 6.4 it caused major damage in Tainan, a city in Taiwan’s southern area. Though it was a natural disaster, the greatest damage was caused by shoddy constructions: a major apartment building collapsed during the earthquake, killing more than 100 residents.

After some consideration, we decided to proceed according to plan, since all the preparations were already made. As we arrived, we could observe almost no impact of the earthquake, everything rather seemed to be „business as usual“. Taiwanese are said to have a strong character, and not to bother too much; still, this time, the wrath against the construction company was so vivid, even we could feel it. 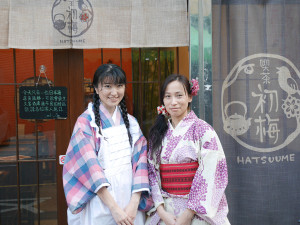 Then, finally, we started with our schedule. One of Obubu Tea Club member‘s Aoki-san lives in Taiwan and owns a Japanese tea café and a shop to experience wearing kimono. Also photo sessions can be added to the kimono wearing experience, which are highly requested by her Taiwanese customers.
Since August 2015 she is taking part in Obubu’s Tea Club and receives regular shipments of Obubu’s tea to use in her shop. There is a boom of matcha and houjicha and it seems that Japanese tea is becoming more popular.
Due to its rarity, we were wearing Yukata ourselves. Even in Japan the occasions to wear these clothings are becoming rare, and it was a nice experience, wearing the Yukata in a foreign country like Taiwan.
We think many Japanese are attracted to the idea of moving to Taiwan, but as Aoki-san’s idea to spread Japanese culture abroad is very similar to Obubu’s mission to bring Japanese tea to the world, we would love to support Aoki-san’s activities furtheron in the future. We highly recommend to come by and visit her when travelling in Taiwan! 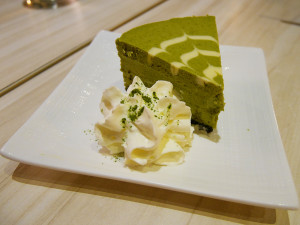 Currently, there are eight places in Taiwan selling Obubu’s sencha and matcha. Japanese tea, especially matcha, is becoming very popular and we could see advertising signs of matcha and houjicha sweets all around the city. Hence, we also visited tea shops that were interested in selling Obubu’s tea in near future. These shops focus on matcha sweets, and latte drinks, as well as offering sencha in elegantly looking kyuusu teapots.
The fragrance of Japanese tea, compared to Taiwanese tea, is deeper with a strong umami flavor. It seems that Taiwanese people are taking great pleasure in this taste, and sencha gains great popularity. We hope that also the popularity of houjicha, and genmaicha will rapidly increase.

One of our goals for Taiwan was to see the boom that Japanese tea is taking here, and to use the opportunity to intrudece Obubu’s tea to tea shops in Taiwan. Therefore we introduced our new product, genmaicha-powder, to Japanese tea cafés, and sweets stores that are already using matcha for their products. The echo to our prototype was very positive, and we are now awaiting the first orders.We believe that the Japanese tea boom will continue further. 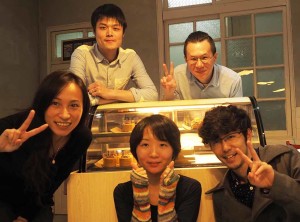 At last, whereever we went during this stay in Taiwan, we met such kindness and openhearted hospitality that the spirit of one of the most important principles in sado, „ichigoichie“, suggested itself:
You should take every encounter with another person as if it was the last time you meet. That moment is very important and implies to show the warmest hospitality. Although there will be plenty times to meet that person again, each encounter should be treated as if it was the last one.

We believe, that it is due to the hospitality of „ichigoichie“ together with Obubu’s mission to bring Japanese tea to the world, that we wish to spread our tea, knowledge and culture.