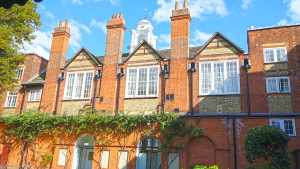 Having been invited by James Thirlwall from Chayou Tea, that organised educational tea events, we could come to Oxford for the second time. Actually the story started during our first Euro Tour two years ago. James joined our first event in London and having found that we share a similar appreciation for tea, we decided to collaborate the following year. The events were really successful last year with lots of interested in Japanese green tea and all of us were really excited to have another go this year. 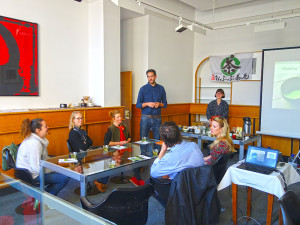 This year the events were held in one of the oldest colleges in the University of Oxford – St. Peter’s College. With a lot of excitement and courage we decided to hold three events: two workshops on a trending Japanese green tea – Matcha, and a general talk about Japanese tea. 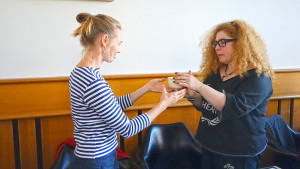 Matcha workshops gave a chance to hear about matcha culture and production, and later everyone could try making it themselves. Usually each guest would receive one Matcha bowl, but because teaware is quite heavy it is difficult to bring a lot of it from Japan. We only brought a few, but that gave a wonderful opportunity to make Matcha friends, as two guests were sharing one bowl. 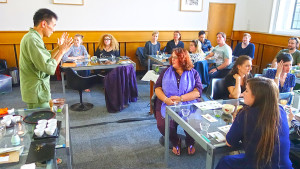 The audience was quite varied: some came to our events last year, some just love tea, some work with it professionally.  A nice surprise was meeting one of our first internship graduates – Alexandra three years after the end of her internship. Some of the event guests even joined Obubu Tea Club after the event to support our activities and to be able to continuously enjoy fresh Japanese tea.

We even had a burst of creativity and inspiration, as one of the guests, who actually didn’t have that much experience with Japanese tea, suggested capturing tea steam in the factory to use good tea ingredients inside for skin care products. Such a novel idea! 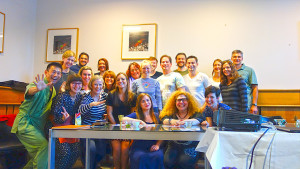 Oxford is always very welcoming and with a growing number of tea friends we are sure we will come back next year. Big thank you to James and Chayou Tea for having us. See you next year!