Today’s post is about the history of tea in Wazuka, the beautiful hometown of Obubu, where all our teas are grown. Chagenkyo, Wazuka’s nickname, means the home origin of tea, or Teatopia, as we like to translate it. In fact, Wazuka has cultivated tea since the Kamakura period, over 800 years ago, when Japanese green tea first came into existence! 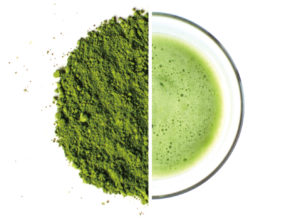 The ancient origins of tea in Japan are unclear, but most scholars agree that it was introduced several times, in different forms, by Buddhist monks returning from study in China. Japanese green tea first developed in the 12th century, in the form of matcha. Eisai (1141-1215), the founder of the Rinzai sect of Zen Buddhism, wrote the first Japanese book about tea, entitled Kissa Yojoki, or The Treatise on Drinking Tea for Health, which described how to grow, process, and drink tea. Eisai’s technique was to grind the tea to a powder and then whisk it with hot water. 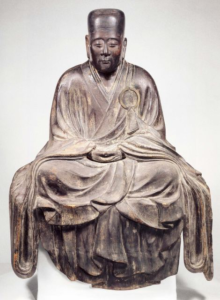 It is said that the shogun at that time, Minamoto Sanetomo (1192-1215), suffered from alcoholism, and that Eisai introduced him to tea as an alternative, which cured him. The shogun was impressed, and spread the custom of tea drinking throughout his court. It was around this time that the first tea was planted in Wazuka (then part of Yamashiro province) on the foothills of Mt Jubu, in an area now called the Harayama Tea Fields. The site is within walking distance of the Obubu house, about a kilometer or so to the north, and features a beautiful, circular pattern of tea bushes. 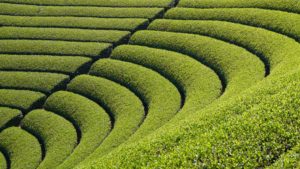 Five hundred years after the first tea was planted in Wazuka, sencha tea (which is brewed, like most teas today, rather than ground and whisked) was invented in Ujitawara, a town about 10km northwest of Wazuka. Since then, Wazuka has traditionally been a sencha-producing area.

By the 19th century, Wazuka was shipping its tea for sale in Edo (now Tokyo), and began to trade with foreign countries such as the United States. In the 20th century, tea production dropped around the time of WWII, when food production was the priority, but then increased significantly with the help of more efficient farming methods.

Now, in the 21st century, Wazuka produces about 2% of Japan’s tea, and has a reputation for especially high-quality tea with a savory umami flavor. About half of the tea produced in Kyoto is grown here, and more than half of Wazuka tea is made into matcha.

Delicious, newly made Wazuka tea is one good reason to visit the town, but there are so many more. Fresh air, kind people, beautiful scenery, and interesting cultural sites are complemented and enhanced by the centuries of history behind it all.

Weinberg, Bennett Alan, and Bonnie K. Bealer. The World of Caffeine: The Science and Culture of the World’s Most Popular Drug. New York: Routledge, 2001. P.133-4