More and more individuals are becoming enchanted by the Japanese tea room and ceremony service. Chado (the Japanese tea ceremony) searches for finesse in simple movement, and showcases elegance and purity in form. When coming to Japan, it seems as if these qualities are inherently ingrained within the lifestyles of the people. Coming to Japan and experiencing Chado in its origin country elevates appreciation more so than ever; sitting on the tatami, the peacefulness of the tea room along with the purposeful, exacting movements and form of the Teishu (the host who serves the tea), the tranquil mindset stays with us even after the ceremony ends.

But at the end of the trip, when we go back home and must return to our day-to-day schedules, recreating these scenarios and atmospheres may be a little difficult to re-create within our own households.

In comparison to traditional Japanese tea wares such as Kyusu’s and Houhins, modernised western designs of tea wares stemming from Chinese tea vessels have become popular in regular households, both in Japan and on a global scale. With the East British Trading Company transporting tea from Asia to Europe, the refinement and evolution of high tea service became part of sophisticated social fashion in history, and the tea pot has solidified itself as one the symbols of tea since. 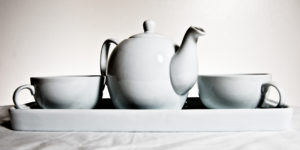 So; the dilemma stands not only with household consumers, but also within restaurants and cafes, of how to adapt already bought tea wares to their precious Japanese tea. How do we re-create Japanese tea taste that reflect the atmosphere and heart of Japanese tea and tea service? How do we utilise utensils and wares that have seen usage for multiple teas and western brew methods?

The simplest answer would be to invest in new tea wares, specifically for the purposes of brewing Japanese tea. But if you are not able to give in to the luxury of purchasing new, yet desirable, tea wares at the drop of a hat, the next best thing is to understand what you already have. A few things could be these;

Observe and consider your tea pot. If there is a metal filter or basket that is used for the straining of tea leaves, it is suggested to remove these to allow the leaves greater movement to expand in the water. This also allows the extraction of flavour to be more fruitful alongside appropriate water temperatures. Metal and plastic affect the flavour of tea, as they easily absorb flavours over time.

The material of your teapot will also affect the steep time of the tea. For example, tea pots of ceramic or glass material retain and insulate heat better than metal ones, so this means that steeping time should be shorter. Tea pots made of metal will lose heat more quickly, so the steep time may have to be adjusted.

Another factor to consider is the size of your tea pot; teapots sold at most stores are considerably larger than that of Japanese kyusu and houhin. Adjusting the amount of tea and water required will depend on whether your teapot holds 2 cups of tea or 10 cups! So, the larger the vessel, the greater the quantity of tea leaves would be needed. Tea leaves are also economical in that they can be steeped multiple times, giving you many more cups of tea than one!

The temperature of the water is probably the most crucial aspect of the tea making. Understanding the tea you are using will mean that the flavour will be affected by the water temperature. A guide to following temperatures and steep times can be found on our previous post ‘How to brew delicious Japanese green tea’.

Transferring your brewed tea from the brewing vessel to a separate serving vessel is also suggested, as this stops the tea from steeping further, which ultimately means the tea will not become bitter. When brewing the tea, water temperature must be adjusted to suit the tea being used (as we all know now!). 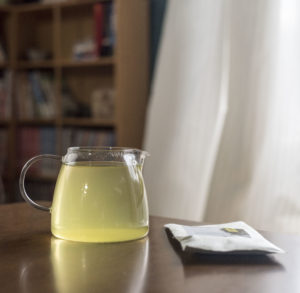 Transferred brewed tea into a glass vessel like this one allows you to have not only perfect brewed tea without over steeping the brew, but also to look at the beautiful colour too. Photo credit: Kayla Innes.

If you have a beautiful tea set you want to show, use it! Tea is an enjoyable experience and one with wide variance in service culture, and so highlighting these differences is a unique and interesting way to serve tea. If for example, you have a fine bone china tea ware set, use the tea pot as the serving vessel for high quality sencha such as Gyokuro, which asks for very low temperature water and in turn would be very well suited to the bone china. Adapting the sugar bowl to hold Japanese tea candies in replacement of sugar cubes is also a way to utilise another component of the set. Being creative with what you have is always interesting!

Ultimately, brewing Japanese tea is highly approachable and should not be feared! What is key is understanding the tea you are brewing along with the wares you own and utilising them as best as you can.