Hello again! This is Giedre. I am continuing my non-traditional tea brewing methods and tool adventure! This week I would like to introduce you to the coffee brewer- Chemex. As well as, one of my favourite Obubu’s tea – Wind sencha. In case you missed the first part of the article and experiment with Siphon click here. 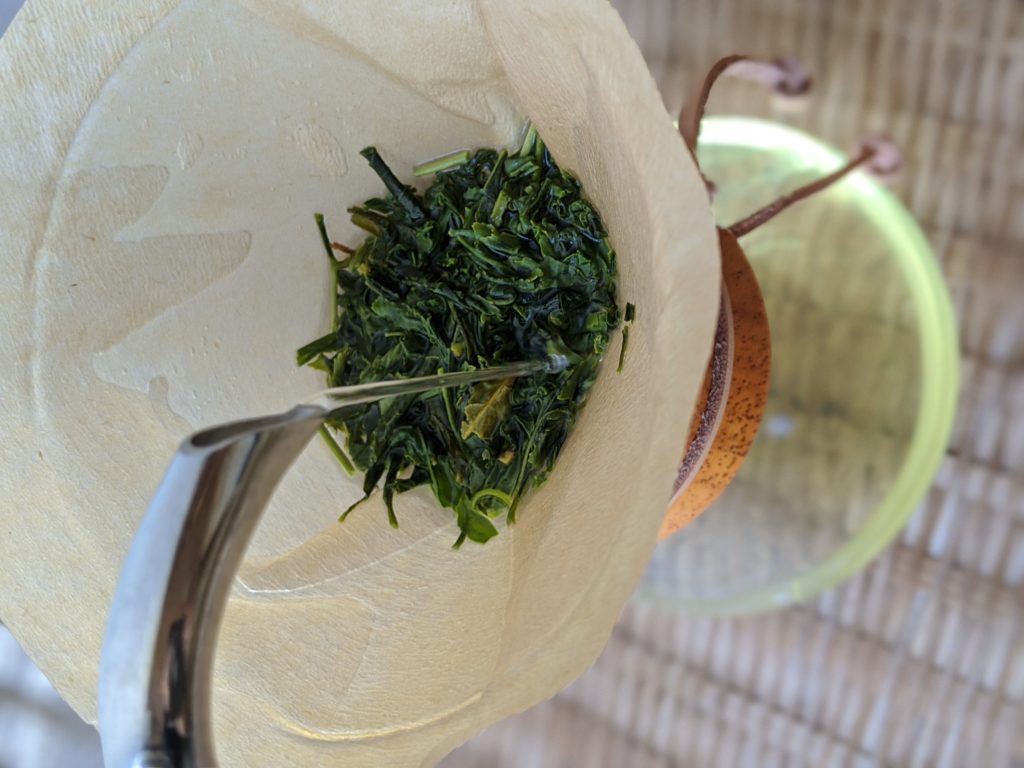 We have to thank Peter Schlumbohm for inventing the Chemex coffee maker in 1941. Most of his inventions were about making everyday objects more functional while at the same time more enjoyable to use. One of his 300 patents was about making a perfect coffee brewer, simple to use and at the same time nice to look at. His invention – Chemex has been recognized as “one of the best-designed products of modern times” by both the scientific and design communities.

Similarly to other pour-over filters, such as V60, Chemex is all about slowly pouring hot water over coffee set in a cone shaped filter. That water then flows towards the center of the cone thus extending the amount of time it is in contact with the coffee. Tea, when brewed with this method, has a reduced water contact time in comparison to coffee because of relatively larger particle size. However, Japanese green tea is usually infused for a relatively short time and works well with pour-over method. Most often paper cone filters are used for brewing with Chemex, although different filters can be used for different outcomes. Of course, I decided to experiment with as many different filters I could get my hands on – paper filter, cone, sock cloth, and disk filter.

One of the more popular filters is a paper filter because of its ability to trap micro-fines and remove most oily components from coffee which other filters are not able to do.  One small tip – rinse the filter before you brew. This way a paper taste and dust will be rinsed off and the brewer will warm up.

Cone filter is a reusable stainless steel cone with small holes in it which are designed to fit neatly inside a Chemex. Basically, it works the same way as paper filters but it is not as fine as the paper filter, thus it’s not able to remove as many unwanted particles.

Sock cloth is basically a tightly knitted piece of 100% cotton fabric and due to its material structure has no real influence on the tea flavour in comparison to other filters.

Disk filter is a stainless steel reusable disk for the AeroPress brewer. It is not originally used for Chemex and makes infusion a little bit different than with other filters. It allows the tea leaves to spread around in the most space, thus the water runs pretty much directly through them greatly reducing the infusion time. The disk I had didn’t really match with my Chemex, therefore, there was a little gap between disk and Chemex pourer, reducing the infusion time even more.

To find the perfect Chemex tea brew, I have been experimenting with different tea leave ratios as well. It is really a personal preference decision – 4 g of leaves gives a light refreshing taste, 5g – 6 g is my personal preference – the flavour is well extracted and well balanced. If you are looking for a really intense flavour or might want to make a bigger amount of tea go for 7-8 g. Regardless of the filter and the amount of leaves, water has to be poured slowly, either in a circular or zig-zag manner with pauses to ensure that all of the water goes through the filter before continuing to add more.

All outcomes were great in taste and had similar qualities, but the different filters still had some influence on the tea colour and taste. Cone filter brew was the lightest in taste and colour with refreshing and sweet umami notes. Kyusu infusion was well balanced but didn’t stand out from all of the other infusion methods. The paper filter had the longest infusion time which resulted in deeper flavour but also brought astringent vegetal flavour with no umami. Fabric filter produced round, smooth and well-balanced umami and vegetal flavour, which was one of the winners together with a disk filter tea which extracted the richest sweet umami notes.

Overall I had a great experience with Chemex! It is also suitable for not only sencha but gyokuro and hojicha as well. Quick and easy way to make a great cuppa. I would say that the only major disadvantages are that it is not really suitable for all kind of teas such as rolled oolong, and also, if you want to make a really small amount of tea you still have to use a bigger amount of leaves to get good results. I won’t change my kyusu to Chemex for everyday use but it is a really convenient and aesthetic way to make tea by using a barista kettle and just one dish with an infuser.

I am looking forward to inviting you for three different cold brew cups of gyokuro and tell you more about other non-traditional tea brewing methods next week!