Hello everyone! This week’s post is the first section of a series on Japanese tea names. If you’ve ever been curious why a tea is called by a particular name, this is the post for you!

Perhaps the most important word on this list is cha, or tea. The Japanese character has its origins in ancient China, where it first referred to bitter herbs, before narrowing its meaning to tea specifically.

Matcha (pictured above), the first and most traditional of Japanese green teas, literally means “rubbed tea”. Which is exactly what matcha is! Ceremonial grade matcha is ground (rubbed) to a powder in a granite mill. It is so fine, it will settle into the lines of your finger-print. 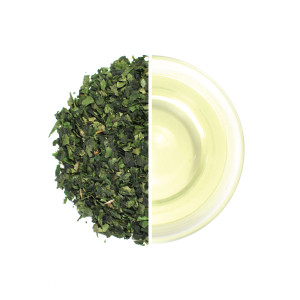 Tencha is the tea that matcha is made of. The leaves have been processed and dried, but not ground yet. Ten means “mortar” or “grind”, and refers to the matcha-making process tencha is intended for. Most tencha is made into matcha, but it can also be drunk in its whole-leaf form. 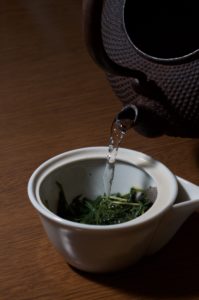 Sen means “infuse”, and sencha is tea that is infused in water. Sencha was invented in the 18th century, and before then, all tea was lower-grade bancha (tea made from older leaves, sometimes roasted) or matcha, which is described above. These days most teas are infused, but back then, sencha’s name set it apart from the usual tea-whisking technique.

Kabuse comes from kabusu (被す), to cover. Kabuse teas are shaded, usually for several weeks, while growing in the field. This encourages the plant to produce more chlorophyll, and makes the leaves more tender, producing a delicate, rich flavor. Sencha is often grown uncovered, so kabuse sencha is a sub-category. Many other kinds of teas are shaded as well (matcha, gyokuro). 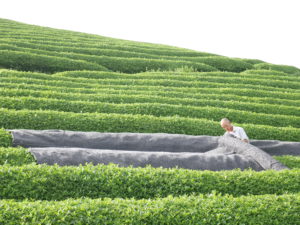 Fukamushi means “deeply steamed”. Most Japanese green teas are steamed for 30 seconds to a minute. Fukamushicha is steamed two or three times longer. The technique creates a darker green tea with a rich, full flavor. The opposite would be asamushi (浅蒸し) or lightly steamed sencha, which has an especially short steaming time. 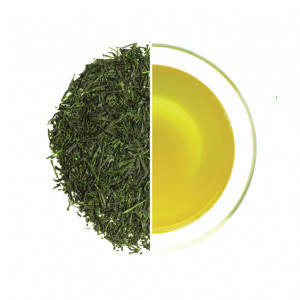 And that’s the end of the first section! Next week, we’ll talk about gyokuro and kukicha. Are there particular tea words you’d like to know more about? Let us know in the comments!