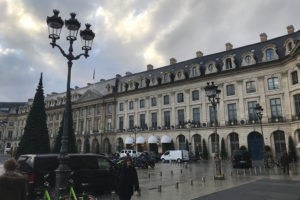 After 5 years Obubu team returned to Paris. We stopped here on the very first Obubu’s Europe Tour and have not had a chance to come back since. So it felt like it was time to visit Paris again. This time we did not plan any specific event ahead of time. However, a new tea friend – Cécile Nguyen-Nouhouang, messaged us suggesting to meet and to invite tea enthusiasts in Paris to a public tea meeting with Obubu. She also went to speak with the owners of a beautiful Japanese patisserie – Tomo, and they were happy to welcome us for the public meeting. People we free to drop in around the lunch hours, and some stayed several hours wanting to chat with us and to try some Japanese tea.  We sat together with everyone and made tea, it was a lovely informal meeting. 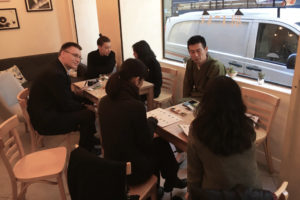 Aside from the improvised public meeting we could also meet some influential people in the Paris tea world. One of the more exciting meetings was with Carine Baudry, who used to be the director of Palais de Thes tea school several years ago, then left it and opened her own tea school, with special focus on learning to recognize tea flavors and aromas. We are looking for some ways to collaborate; and in future may hold combined Japanese tea and sensory experience workshops together. 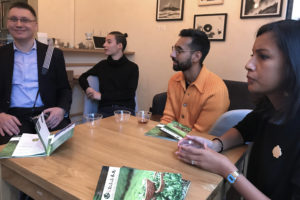 Another nice meeting was with Manuela Leriche, who is the instructor at the Palais de Thes tea school. She has visited Wazuka a few years ago, at he beginning of her career, and now is thinking of another trip to Japan. It was wonderful to catch up and learn more about the tea situation in Paris. 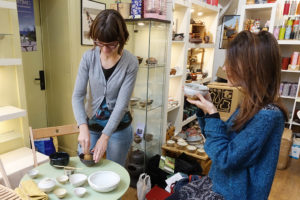 In addition to that we went to visit a few tea shops in Paris, to see what the situation is like with our own eyes. We received a really warm welcome from Valerie – the owner of Neo.T, and had a nice exchange while brewing Japanese and Chinese teas. We also stopped at The-ritoires, that is quite new but feels like from the beginning of the past century. We could also see some of the teashops that have a special focus on Japanese teas, such as Umami Matcha Café – with a young and trendy atmosphere, Toraya – that serves Japanese sweets and some nice teas, Soen that tries to keep the connection with the past in a modern and stylish way, as well as Jugetsudo – a high end Japanese tea café. All of this thanks to Louise – a young tea enthusiast in Paris – who was really nice to guide us through the tea world in Paris. And Diana, one of the Obubu internship alumni came to meet us too. 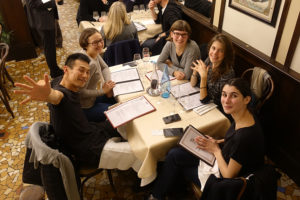 We have lots of hope for tea in Paris and are really looking forward to returning to here next year.