Nothing more appetizing than a good appetizer

Hello all! Welcome back to Kai’s Kitchen. This week we kick things off by leaning a bit into the savory side of things. Japanese Tea is very well known for its insane umami flavor. Umami is a word overused and not very well understood in the world of cooking. Many consider umami to be the 5th taste (salty, bitter, sour, sweet), and it is highly understood and beloved by the Japanese. That is not to say other cuisines haven’t utilized Umami; tomato sauce, beef stews, and many cheeses all contain the flavor profile of umami. Umami’s “discovery” or “definition” is credited to Dr. Kikunae Ikeda, a Japanese chemist who found that the flavor of umami comes from the Amino acid L-Glutamate, which is responsible for the meaty, lingering flavor of umami. Kumiko Ninomiya, the director of Umami Information center, is credited for saying, “Umami is a Japanese word, but a universal taste.” A good way to describe it is a pure taste of savoriness. Chicken broth, Miso soup, certain mushrooms, a slice of raw tomato; all have inherit umami characteristics. 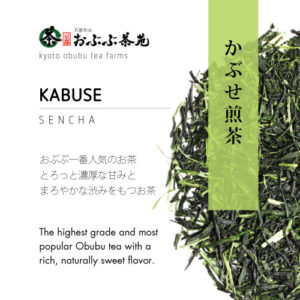 A great way to start off any meal is with a savory and delicious appetizer. Kabuse Sencha is known for its intense umami flavors, due to the shading process it undergoes. Shading the tea prevents catechins from forming, which are responsible for giving many teas their bitter and astringent taste. Shading in turn increases the amount of theanine, which gives it the sweet and umami flavors. So today we are going to utilize the insane umami bomb that is, Kabuse Sencha! The first dish I’ve prepared for you all is a little mix of many different worlds of cooking. I present, Kabuse Parmesan Bruschetta topped with a Japanese influenced Pico De Gallo! This is a little twist on a cheesy spinach bruschetta, replacing the umami in the spinach, with Kabuse! Let’s go!

1 lemon worth of juice

The night before, brew a nice pot of Kabuse Sencha. Once you’ve enjoyed that flavorful cup of delicious and umami tea, take the leaves out and put them onto a sheet tray or plate lined with paper towels, then pat down with another paper towel. Make sure that you try to get the most moisture out as possible. That is NOT saying to squeeze the water out of the leaves, but when brewing make sure you get most of the water out of the leaves. Cover and place in the fridge to let it drain. 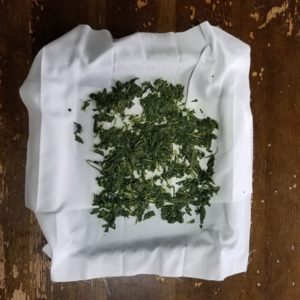 The next day when you’re ready, heat up a pan with 2 tbsp of butter and melt. Once melted add the pre brewed Kabuse and saute until the Kabuse has soaked up the butter and it has turned nice and crispy! Set aside and let cool.

Now it’s time for our Japanese influenced Pico De Gallo. What makes it Japanese influenced? The addition of sake, sugar, and soy sauce; and yes, yes I know its Japanese Pico De Gallo isn’t a real thing, but it’s tasty and zesty nonetheless! Dice the tomatoes and onion into cubes of even size, and put into a medium sized mixing bowl. Roughly chop your cilantro and garlic and add it to the mixture. Now add the soy sauce, lemon juice, sugar, sake, splash of olive oil, and a dash of red pepper flake. Mix thoroughly, and set in the fridge for about 20 minutes. 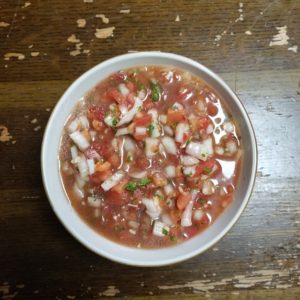 Baguette time. Slice the bread into 1 ½ inch rounds. Drizzle with olive oil, and liberally sprinkle salt and pepper to both sides of all the pieces. Take your sautéed Kabuse Sencha and place on top of every piece evenly. Grate 6 tbsp of parmesan and place on top of the Kabuse. 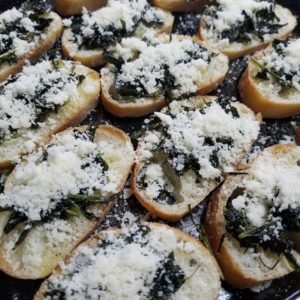 Pop it into the oven and make sure to check it every few minutes or so. Keep it in for 8 minutes spinning halfway, or keep it in depending on your preferred level bread crunchiness and melty, delicious cheese! Once the cheese is melty, and the bread properly crunchy and golden brown; top the bruschetta with the Pico De Gallo and presto! A fantastic appetizer to start off any party that will have people wondering why they haven’t been eating their tea leaves all along. The umami from the Parmesan and Kabuse mixed with the acidity and sweetness of the pico is a very satisfying pairing. 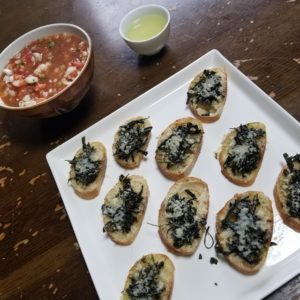 That’ll do it! Thank you all for reading my first official recipe post, and hopefully you’ll try to make this at home. This was a lot of fun to make, very easy, and most importantly very yummy. Since being here I’ve learned more and more about what Umami truly is and its importance to the world of not only cooking, but to tea as well. So until next time, keep drinking spectacular teas and keeping cooking and eating delicious food!