Tea has thousands of years of history over which many different forms and brewing techniques have been developed. Interestingly, unusual brewing techniques and tools foreign to our current times can be read about or seen in museums – it is a great testament to the lengths that tea has evolved over time. It gives us an insight on how tea enthusiasts were looking for the best, most convenient and aesthetic brewing techniques of the time. We have so many great inventions: from Chinese gaiwan to Japanese kyusu. Tea culture as well as everything else around us keeps changing and is developing everyday. I decided to pause for a little bit and take a look at non-traditional, innovative tea brewing methods which, maybe someday, might be considered modern ways of making tea.

After some research about what is new, unusual and popular today, I found a lot of different and interesting brewing tool designs in the tea market. While the majority are pretty similar in terms of technique and are based on already well-known teapot and infuser traditions, I found that some of them are quite unusual and interesting in their ability to enrich an already wide and sophisticated world of teas. For example cold and ice brews – while these are already well known in Japan, they have yet to become popular in the west. Some other ones come from the diverse and constantly evolving world of coffee – good old siphon, elegant Chemex and ice drip techniques were the ones that could be adapted for the tea perfectly well. In this part of the article I will review siphon brewing method.

Good day! I am a tea enthusiast Giedre Trumpiene. I have always been fascinated by the possibilities to explore other cultures and taste of teas. After many years of exploring tea world: studies, tea master courses, tea experiments and endless cups of tea I feel that there is still so much left to learn. Therefore, before starting my tea business, I wanted to come to Obubu Tea Farms one more time and immerse myself with Japanese tea culture. I simply love tea taste and aroma, and it encourages me to get creative and experiment with tea. I would love to share my explorations of innovative/ non-traditional brewing methods. 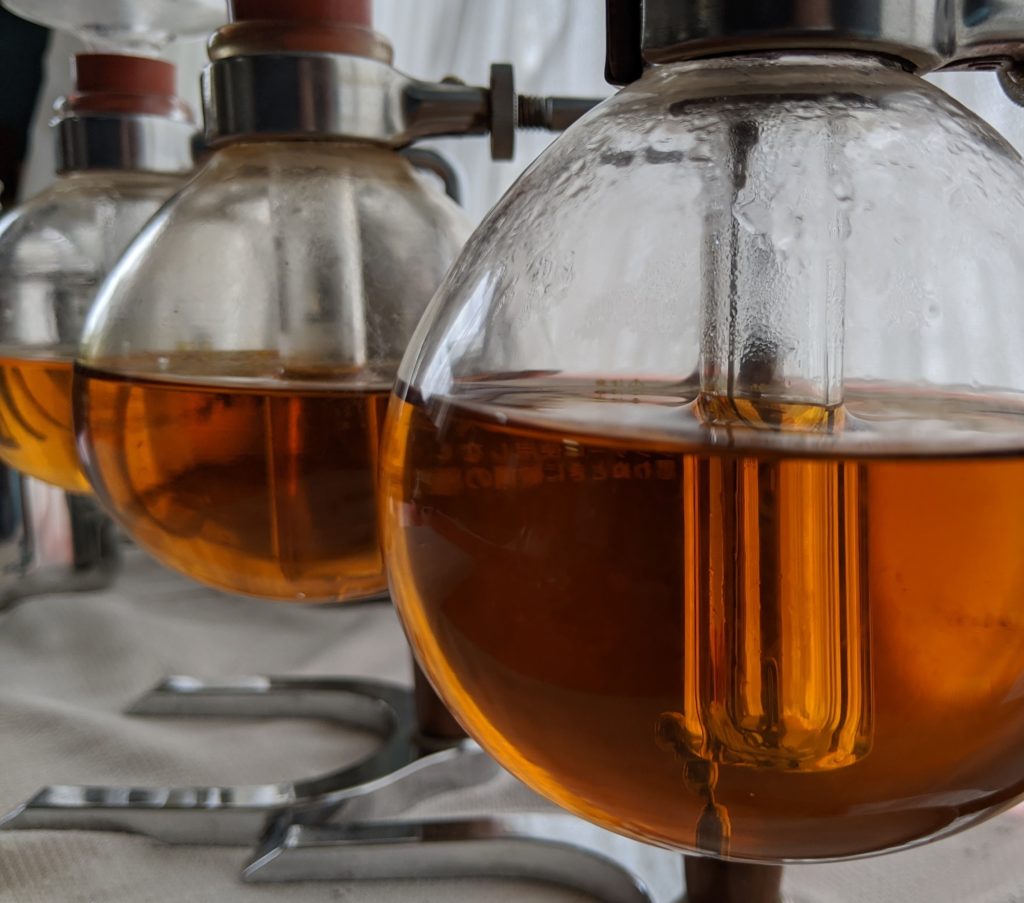 Siphon is well known as an old fashioned coffee browning method which, mostly everyone agrees, makes your coffee great. This brewing method was invented in the 1800’s when people realised that boiling coffee was killing the taste. To avoid it, people started to experiment with vacuums and vapor pressure which eventually led to the siphon. Siphons became popular not just because of better tasting coffee, but also because of its aesthetics, which became a part of coffee ritual when hosting guests. Nowadays, along with other coffee brewing methods, siphon can sometimes be seen in cafes.

You can definitely make tea with siphon! Although you have to be careful, as water temperature during siphon brewing usually stays just below boiling temperature, and not all teas can tolerate water this hot. Because of that, it is best used for black, oolong, hojicha, fermented and herbal teas. It is also possible to brew Japanese green tea, but only if it is a third infusion, which requires hotter water – the first two have to be done in a traditional way with lower temperatures. For my siphon experiment I used Obubu’s Hojicha Basic Roast and Japanese black tea – Wakoucha.

Regardless of the brewing method, there are always a lot of different factors that have an influence on the final result, such as the quality of water or infusers that are used. Siphon is no exception to that. I was experimenting a lot to find the best tea leaves to water ratio and brewing times. Siphon can be used with gas, alcohol, butane, halogen or electric burners as well as paper, fabric, metal or glass filters. For my experiment I used an alcohol burner and fabric filter. 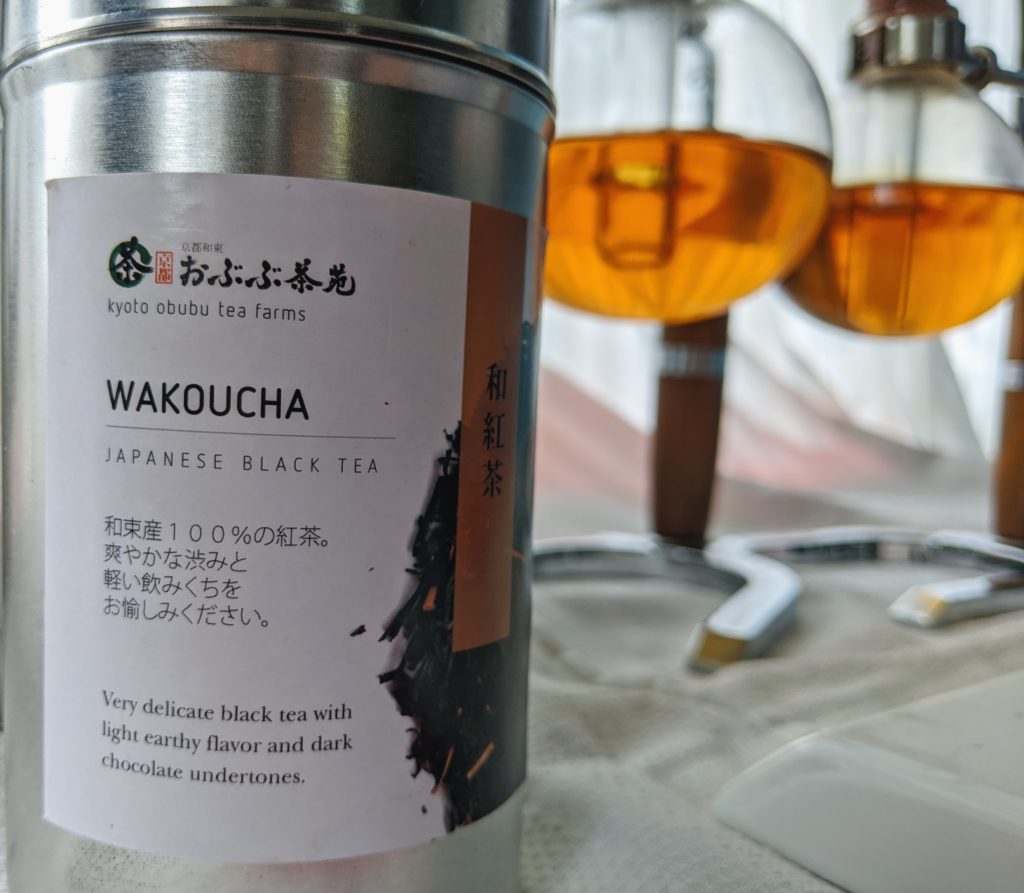 In order to make the process faster, I pre-heated the water before filling up the siphon. Once in siphon, when the water reached the boiling temperature, I allowed it to fill up the upper section fully before adding tea leaves, stirring a bit afterwards to ensure that all of the tea was part of the process. Once the infusion time is up, the burner is turned off and the water is supposed to slowly return to the bottom section of the siphon. However, I found that the time it takes for this to happen is quite inconsistent. In my numerous experiments it took 20 to 60 seconds to fully settle, although 30 seconds seems to be the most usual result, so keep that in mind when estimating when the burner has to be turned off to produce a perfectly infused tea.

I was surprised by the wakoucha tea outcome with siphon! The taste was great and well-balanced. It felt like all tea leaves had a chance to fully release the flavour, which gave it a stronger taste with no astringency in comparison to kyusu brew, which was also really nice, but it had a little bit of astringent aftertaste and less extracted flavour notes. I was also curious about the infusion length influence on the tea taste when using siphon, thus I made some experiments with less tea leaves and longer infusion times. To my surprise results were very similar, but the longer infusion time produced a slightly lighter taste in comparison to the initial brew. You can find my notes below:

To be honest, I have spent a great deal of time experimenting with different hojicha tea brews in siphon. It was mostly because I was not sure whether I was trying the wrong combination of water/leaves/infusion time, or is the siphon just not as good for hojicha preparation as kyusu is. After my latest test with Hojicha Basic Roast I am convinced that kyusu is just a better choice, at least for hojicha. Regardless of infusion time and amount of leaves, while extended infusion had a bit richer flavour, both infusions had a bit of strange watery, metal aftertaste. Experiment notes below:

While Japanese green tea usually has to be prepared in lower temperatures of 60-80 C, its third infusion can actually be done with 90-100 C water – this allows tea leaves to gradually release the flavour and leads to a different taste profile with each infusion. As I am a very big fan of a good Japanese sencha, I could not resist and try out the siphon with Earth sencha brew. I prepared the first two infusions in a teapot and only used the siphon method for the third one. The outcome was a great surprise – flavour was nice and refreshing with floral notes and a bit of astringency.

All in all, siphon can definitely be used to make a good cuppa and if you can invest some time to explore the ratio of leaves, water and infusion time, you can definitely adjust the taste to your liking. It also looks great – a perfect attribute to an interactive tea brewing session. However, it has some disadvantages: not all kinds of teas can be made and some of the teas can have “metal” aftertaste. Moreover, some siphons have to cool down before tea can be served, so you have to keep that in mind when serving guests or preparing your morning tea.

I am looking forward to inviting you for a cup of Wind sencha and tell you more about another non-traditional tea brewing tool – Chemex next week!